Here all the creative pathways meander into one everlasting journey. 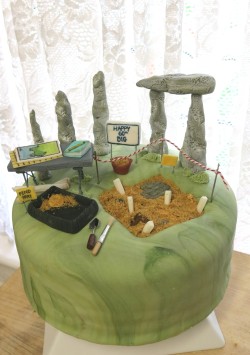 How do I begin this cake?

This is what I was thinking when I got an email from E requesting one of my delicious (her words, not mine) cake creations for her dads 60th birthday who likes motorbikes, whiskey, Wales and archaeology!

This thinking went on for some time, but then, what luck, inspiration struck, how would he like to have his hobby of archaeology transformed into an edible dig site for him to peruse as he wished.

I know, I know they say never play with your food but I think there are moments in life when you really have to just dig in! (Oh I really did say that!) So I pitched the idea originally wanting sweets to be buried, but knowing he would be turning 60 I also had a back up plan of making actual artefacts that have been found in sites around Britain. So she went with the artefacts, this I think was the best choice, sweets would defiantly be fun, but making the artefacts brought a realism to the cake that I think he would appreciate more. 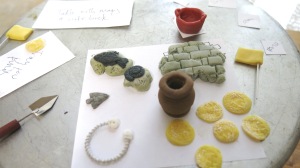 I was incredibly excited to make the artefacts. Straight after some initial research into archaeology I just had to make them.

My Priscacara liops and Ammonite fossils. 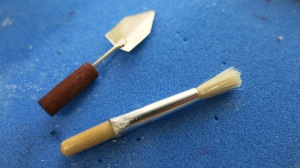 I needed him to have some little tools to be able to dig with so I made the brush by cutting down a larger one I had brought and the trowel was such a brilliant find from the dolls section!

I wanted to have a feature on the cake to draw the eye around the piece and frame the centre piece so I made some standing stones that he would recognise from his trips to Wales.

Painting the gold coins. I love this part, so much detail comes out that the pieces take on a new dimension.

Map of Wales with the dig site marked out in red near Pentre Ifan. 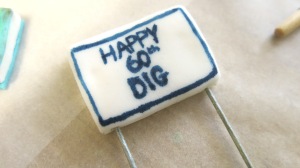 I don’t like to write on cakes in the conventional way so try to incorporate messages within the tone of the piece. 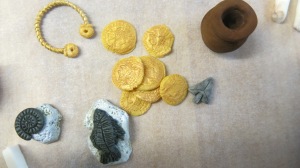 The finds! Sugarpaste replica clay pot, spear head, gold coins, fossils and gold torque (The torque I made from a combination of wire and sugarpaste as it would have been to fragile otherwise, although I try to make everything edible sometimes you have to use wire to strengthen or support objects, but I meticulously tell my clients each and every thing that isn’t for the eating and text them just to reiterate!

delicately spiced carrot cake which I then covered in a zesty creamcheese buttercream. 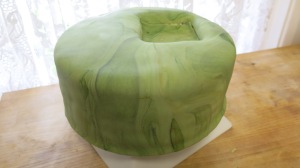 Creating the impression of the Welsh rolling hills with mint and spruce green marbled fondant.

All the little bits and bobs ready to fit perfectly into their place.

Creating height to the cake.

Somewhere to work and write whilst on the job!

I know I made it but isn’t the bucket filled with dirt (crushed ginger biscuit in this case, the flavour marries with the carrot nicely) too cute!

The Roman cobbled road has already been excavated and the site shows potential having also already found a gold coin that is carefully placed in the find tray.

The rest, waiting to be found, peeking out slightly, soon to be restored to their former glory.

Preparation and organisation are important qualities in any budding archaeologist so I made sure he would be prepared! 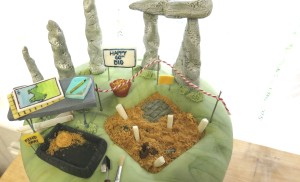 When E emailed me to say her dad loved the cake and that he was like a little boy digging out his artefacts I had a huge smile on my face, this was exactly the picture I had in my head of how I hoped he would respond to the cake, you can never tell what kind of reaction you will get, I worried it might be to frivolous for him, but you know, we all have that inner child no matter how old we are and this cake for a time was his playground!

So I seem to find that I am still getting used to having a blog.

I have all the material, I do a lot of creative things and am surrounded by talented creative people, but the writing, now that’s another matter. I could talk about what I feel or why I did this or that for days, writing is where you think about what you will say then type, then correct some things, then think about it some more and rewrite and then maybe it’s not quite right so…well you get the picture, but I’m working on that!

Honestly, I am, really, this is where I get to posting every week (There I said it and I can’t go back on it now) no excuses. There is going to be a little spring clean going on here, this is the time, my home, my life and Nelipot Lane.

So whilst you are waiting for the new look here’s just a little something I whipped up…….

The Art and Craft of Blogging

The latest news on WordPress.com and the WordPress community.